Côte d’Ivoire has experienced a prolonged period of instability since its socio-political crisis began in 2002. Elections in 2010 resulted in political turmoil, leading to widespread violence that temporarily forced up to 700,000 people from their homes. The resulting economic instability has been felt by the whole population, but the western region has been hit hardest by high levels of violence and the destruction of public and private assets.

With a new government in place, the country is heading progressively towards reconciliation and stability, though insecurity and land tenure disputes continue to threaten some areas, particularly in the West. However, over 23 percent of the country’s population lives below the international poverty line of US$1.25 per day, and the country’s Global Acute Malnutrition (GAM) rate among babies and young children is 7.1 percent. Primary school enrolment remains low, at 50 percent, and the country has the highest rates of HIV in West Africa, at 3.7 percent.

The World Food Programme (WFP) has been in Côte d’Ivoire since 1968.

What the World Food Programme is doing in Côte d'Ivoire

WFP provides balanced daily school meals to 571,000 primary children in Côte d’Ivoire, raising attention spans and school attendance in rural areas. Girls receive a take-home ration or cash transfer to encourage families to send them to school, while 102,000 children receive a micronutrient powder to boost nutrition. WFP also supports the National Directorship of School Feeding so that it can ultimately implement its own school feeding programme. 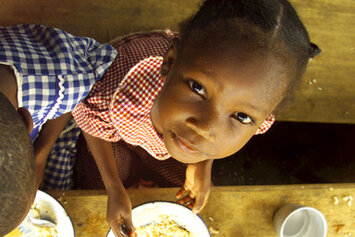 WFP is saving lives and helping rebuild livelihoods with a variety of activities including providing unconditional food and cash for vulnerable families, returning refugees, HIV patients undergoing antiretroviral therapy, and caretakers of severely malnourished children in special feeding units. We also offer food or cash in exchange for rebuilding assets, as well as providing nutrition support to babies, young children and their mothers. 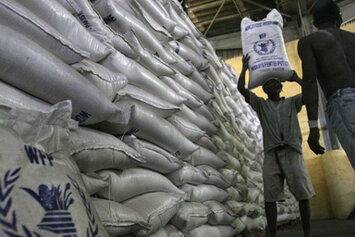