Algeria has hosted refugees from Western Sahara since 1975 in what has become one of the world’s most protracted refugee crises. The Sahrawi refugees are located in five camps near the town of Tindouf in Western Algeria. The harsh and isolated desert environment limits opportunities for self-reliance and, as a result, the refugees depend on humanitarian assistance for their survival.

Malnutrition and anaemia rates had been high in the past, but recent assessments have shown an improvement of the overall nutrition situation of women and children. Both chronic malnutrition and global acute malnutrition among children aged 5 or less are at an all-time low. However, anaemia rates, indicating a dietary iron deficiency, are alarmingly high- at 39 percent among children aged 5 or less, and 43 percent among women of reproductive age. The latest assessments also suggests the emergence, amongst the refugee population, of new issues of public health concern, namely overweight and obesity affecting mostly women, as well as diabetes.

Despite continued negotiations, there is little sign of a durable solution to the political stalemate and camps have been the only alternative for Sahrawi refugees. The status quo has fuelled frustration and disillusionment, especially among the young, which could lead to increased insecurity and tensions in the sub-region.

The World Food Programme (WFP) has supported the most vulnerable refugees since 1986 with basic food and nutrition needs at the request of the Government of Algeria. In the absence of a political solution, WFP must continue to provide humanitarian food assistance as this is a key factor to peace and stability in the camps. WFP activities aim to improve the food consumption of the most vulnerable refugees, reduce acute malnutrition and anaemia and support the enrolment and retention of refugee children in school. WFP also started the implementation of complementary activities that contribute to the resilience in the camps.

What the World Food Programme is doing in Algeria

WFP combines prevention and treatment approaches to address anaemia, stunting and malnutrition among children aged under 5, and pregnant and nursing women, targeting some 22,500 people under its Mother and Child Health programme through 29 health centres. WFP assistance includes the provision of oil, sugar and special fortified foods. 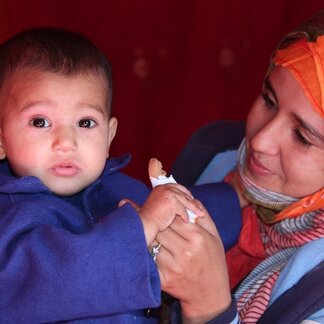 WFP aims to meet the basic food and nutritional needs of the most vulnerable refugees by providing 90,000 general food baskets plus 35,000 supplementary baskets per month. The composition of the baskets can vary, depending on funding, but they generally include cereals, pulses, sugar, vegetable oil and blended food for an overall caloric value of about 2,166 calories per person per day. The food is distributed monthly through 116 final distribution points in all five camps. 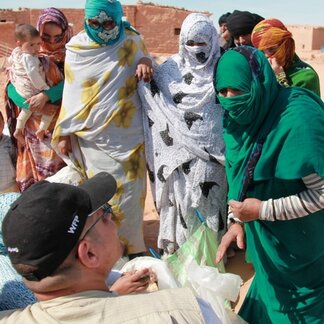 WFP provides mid-morning snacks – in the form of milk, fortified biscuits and if available dates – to 40,500 children in 70 primary schools and kindergartens. WFP also rehabilitates and constructs school kitchens and stores. 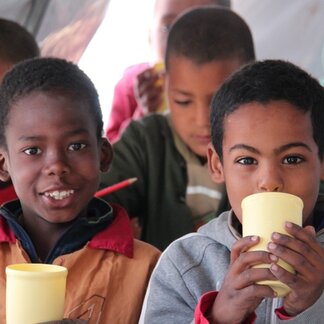 WFP aims to enhance the food security in the Sahrawi refugee camps with complementary activities that contribute to the resilience of refugees who have been living in camps for over 40 years. Through these activities, WFP offers occupational opportunities by building on existing and external skills and expertise, in combination with small business management skills.

Growing food in the Algerian desert

Achieving Zero Hunger is the work of many. Our work in Algeria is made possible by the support and collaboration of our partners and donors, including: